This is such great news, now Indian Railways is been betting high on solar power. After the successful execution and implantation of solar panels in DEMU trains, Railways is all ready to install them on mainline trains in about 250 coaches. As per the information, these solar panels are retro fitted on the non AC coaches for alternate fuels. Being focusing on taking the big step and initiative towards eco friendly measures, the solar panels have been installed on the roof of famous Sitapur Delhi Riwari passenger based train. The solar energy that will be generated from these solar panels will be utilized in order to be functioning mobile charging points, lights, power fans and more. 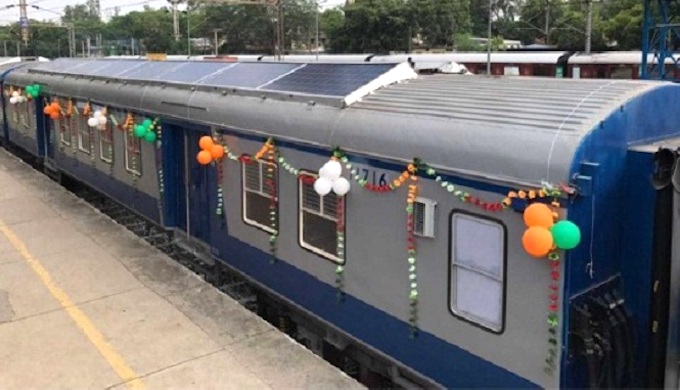 In accord to an IROAF official stated to Financial Express Online, the cost to fit solar panels on every coach will be approximate Rs. 9 Lakh each and with more panels fitting, it could come down to in the range of Rs. 3 to 4 Lakh per coach. The prime benefit of generating electricity using solar panels is that it will supplement batteries that might run down because of the slow speed of the trains. Adding to this, each coach is supposed to generate about 15 to 20 units of electricity each passing day. So, in a 10 coach based train, about 80000 units each year will get generated. In total, the weight of solar panels is 120 kg. The coaches have sensors meant to monitor and analyze the parameters of solar energy that will be generated and released. In the first, a total of 60 solar panels will be installed. In total IROAF has installed and fitted flexible solar panels on 11 coaches.

The department even identified 3 more trains as per which flexible light weight solar PV panels will get installed. Just for the record they are, 54334/33 Lucknow–Varanasi via Faizabad, 54255/56, Varanasi–Lucknow via Pratapgarh and 14203/04 Varanasi–Lucknow Intercity train. The solar panels are known to be manufactured by the CEL and the tenders for the installation in trains will be released by mid of August. In the last year, department of Railways had introduced its first DEMU train in which fans and lights are powered with roof top solar panels. Undoubtedly, been a part of the great initiative been taken by the Indian Railways, it is continually with time is been trying to make more use of solar power and renewable energy to meet its electricity based needs and requirements limited to not only trains but also stations as well. There are few stations lying across the Railways network including New Delhi, Guhawati and Katra that are actually harnessing solar energy power and moving towards more eco friendly and greener ways to meet diverse electricity prerequisites and needs to the core.

The lights and fans in passenger trains will run on solar power, as per Indian Railways

2018 IRCTC Refund Rules – Is AC not working in your train? Know how to claim for refund
Indian Railways to unveil over 200 new lines soon