Want to know about the refund rules that is been defined by the Indian Railways and how much will get deducted once you cancel or make any changes in the tickets? Well, it is important to be aware of the time limit that is been attached with the refund and so. For confirmed rail tickets, people can get refund anytime prior 2 hours of the train’s departure time. For all kinds of waitlisted or RAC tickets, people can opt for refund within 3 hours of time to the actual departure of the train. For those trains that are departing in between 21:00 and 6:00 hours, within 2 hours of opening of the reservation office, refund will be done. In case, you are cancelling in advance 48 hours of the train’s departure time, then the cancellation will depend on the class in which you are travelling like Rs. 60 for sleeper class, Rs. 100 for 1st class, Rs. 120 for executive class and so. The amount that is remaining will get paid to you in the same account through which payment has been done within 3-5 business days. So, know about them and make full utilization of the same to avoid any trouble at the last minute of time.

Indian Railways has actually many rules and processes defined when it comes to train ticket cancellation along with getting refund amount and in this post you can find some of the rules that are recently been introduced related to ticket cancellation as well as refund of amount.

As per GST that is been updated on 5th July 2017, Train Ticket Refund Rule and refund of tickets before and after implementation of GST covers the following pointers. The procedure could be followed in service tax or GST and fare refund for all the GST applicable upper classes.

For e-tickets, IRCTC service charges are as follows.

Apart from this, TDR depicts for Ticket Deposit Receipt and in case the user was not able to travel due to any of the reasons including train cancelled by Indian Railways, train gets delayed by more than 3 hours, AC failure, travelling without any ID proof, difference of fare in case proper coach is attached, wrongly charged by TTE, party partially travelled, or so, then TDR refund will be conducted as defined by Extant railway rules. TDR could be filed within 30 days of the train’s departure date and refund will take about 60 days or more and do make sure that e-ticket refund could be filed online but not of i-ticket. Hope the information is useful and informative. Stay tuned and be updated. 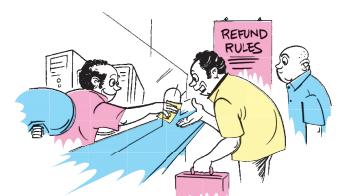